If you’re a fan of red-bottomed heels, head to London because Christian Louboutin has designed a gorgeous tree for Claridge’s this year. 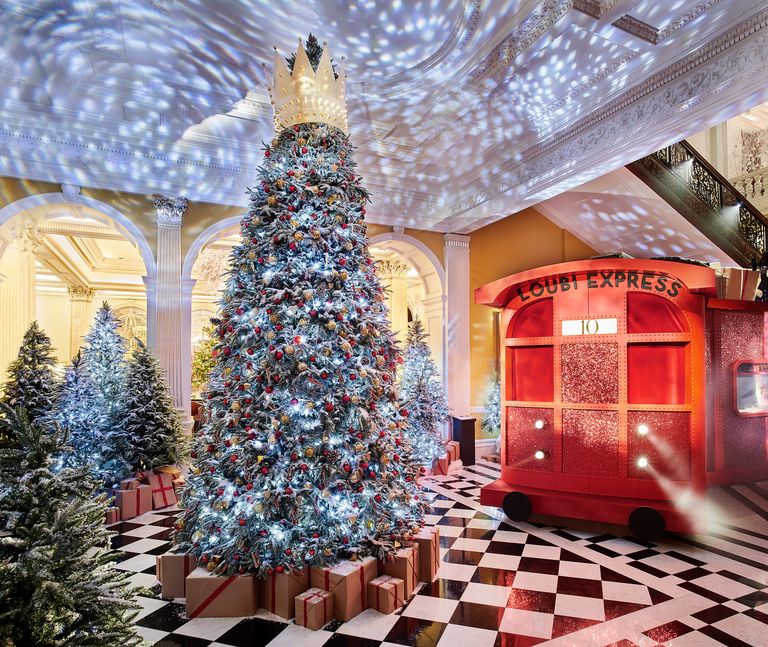 This is the tenth year that the 5-star hotel has invited a talented guest to design the Claridge’s Christmas Tree. Standing five meters (16.4 feet!) tall, the tree is located in the centre of the lobby, surrounded by a snowy forest clearing. Decorated with sparklingly fairy lights, fake snow, shoe-shaped gingerbread biscuits, gold and red baubles, and a gold leaf crown at the top, the tree is as glamorous as a pair of Louboutins.

To accompany the tree, Louboutin created the The Loubi Express, a sparkling red (the Louboutin red, obviously) train carriage topped with wrapped presents. “The idea of travel has always been a key source of inspiration in my work and I wanted to capture the excitement and romance of it,” Louboutin said in a press release. “There is something nostalgic about traveling by train, it reminds me of grand adventures and journeys home.”

Even better? The glittering red train doubles as a bar.

Designed with red velvet interiors, the carriage has four tables with seating on a first come, first serve basis. A “cocktail conductor” serves up champagne and bespoke cocktails like a pineapple punch inspired by Louboutin’s favorite fruit. There will also be a food menu with decadent bar snacks including lobster wellington prawn tempura, truffle gouères, and Claridge’s canapeės. And, of course, a Christmas soundtrack will play for added festive cheer.