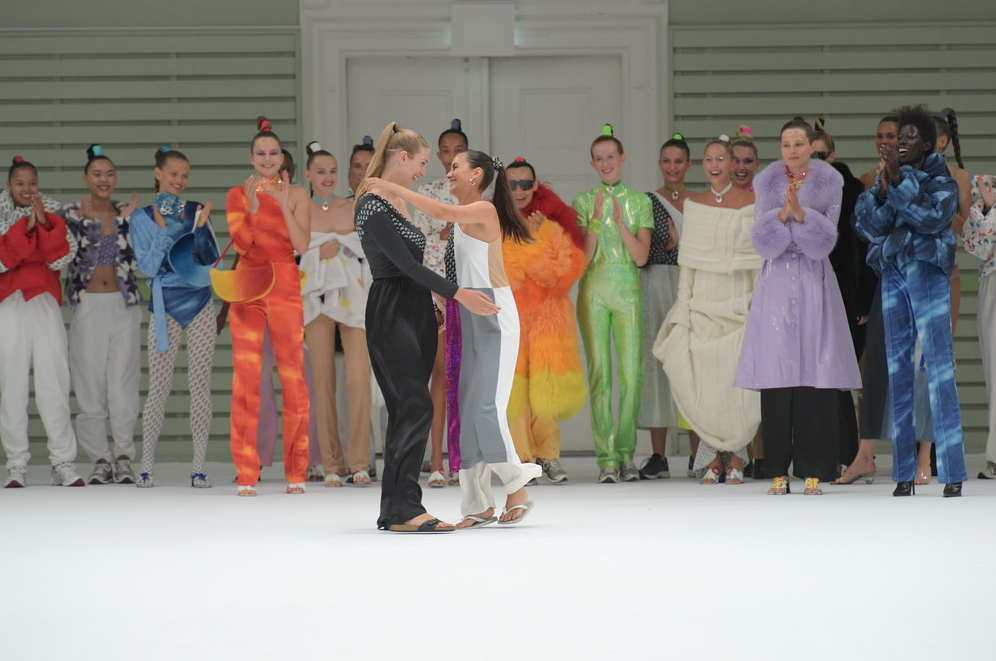 For their spring-summer 2019, Barbara Potts and Catherine Saks clearly wanted to stir away from what Saks Potts is mostly known for: the best-selling faux fur jackets. And they tried hard to surprise. In the beginning, a dance troupe performed in the middle of the stadium, where the collection was presented; then, a model came out, wearing a dramatic white dress in fur. And then, the show really began. The collection was meant to be a nod to the Olympics and everything connected to sport. But the result could have been much better. The designers definitely needed to concentrate more on editing the looks, as in the overall the collection felt simply… messy.

Holographic, Lycra ensembles. Duvet jackets with mountain prints. Logomania tights. Too much going on in here. Also, I couldn’t help but note all the elements that seemed to be knocked-off from Area NYC. The brand’s signatures: the big sunglasses, the over-the-top styling, the early 90s glamour. All present at Saks Potts, executed in a very similar way. The best (and certainly the most original) part of the collection was the fur. That lilac coat with a fluffy collar and equally fluffy cuffs is a highlight, just like the ombre teddy bear piece.

Another week, another fashion week. Some Copenhagen designers, like Cecilie Bahnsen, have a clear signature and keep to it. Other, like Ganni, recycle trends. And the other others, like Saks Potts, are established for one thing, but seem to struggle to evolve. Still, the Danish designers are worth watching.