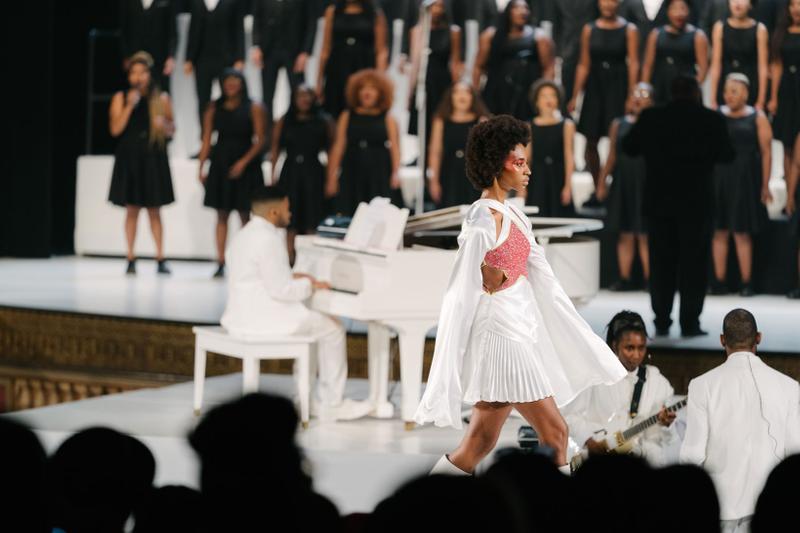 After one season hiatus, Pyer Moss is back. And it’s really good. Kerby Jean-Raymond‘s spring-summer 2020 collection, presented in Brooklyn’s Kings Theater in Weeksville and entitled Sister, is the third and final chapter in the Pyer Moss’ “American, Also” trilogy – and it paid homage to Sister Rosetta Tharpe. A singer-songwriter who rose to popularity in the 1930s and 1940s, Tharpe is widely considered to be the godmother of rock & roll, though her legacy has been diminished in music’s history book. “I think relatively few people know that the sound of rock and roll was invented by a queer black woman in a church,” Jean-Raymond told Vogue backstage. “I wanted to explore what that aesthetic might have looked like if her story would have been told.” There were obvious nods to Tharpe’s musicianship: the shape of her guitar was threaded through the curvy lapels of satin coats, and the most literal reference was a guitar-shaped handbag. There were subtle nods to her style too: a slightly monastic scarlet silk tunic layered over matching satin pants, for example. Tharpe wasn’t the only black musician on the Pyer Moss mood board. Look closely at the chunky gold beads that were threaded onto braids and strung on statement necklaces, and you will notice the spirit of Lauryn Hill and Erykah Badu.

The rousing soundtrack included songs by several more legendary black female artists, like Missy Elliott. During the finale, the gospel sang Cardi B’s already-iconic Money and the audience went crazy. Not only music plays a crucial role in Kerby’s creative process. After last season’s partnership with Derrick Adams, Jean-Raymond sought out the talent of Richard Phillips, an artist who recently made headline news after he was exonerated after spending 45 years in prison for a crime he didn’t commit. Pyer Moss doesn’t only educate on culture. The brand also gets political (“Vote or Die (For real this Time)” slogan on a tank-top actually conveys a meaning, not just some empty words) and… makes you want the clothes! They aren’t heavy due to the weight of references behind them. It’s worth mentioning that the designer is also the new artistic director at Reebok, and his athleisure offering in the end of the show well balanced the collection.